Let (Xk) be a sequence of independent r.v.’s such that for some measurable functions gk : Rk → R a weak limit theorem of the form

holds with some distribution function G. By a general result of Berkes and Csáki (“universal ASCLT”), under mild technical conditions the strong analogue is also valid, where (dk) is a logarithmic weight sequence and DN = ∑k=1Ndk. In this paper we extend the last result for a very large class of weight sequences (dk), leading to considerably sharper results. We show that logarithmic weights, used traditionally in a.s. central limit theory, are far from optimal and the theory remains valid with averaging procedures much closer to, in some cases even identical with, ordinary averages. 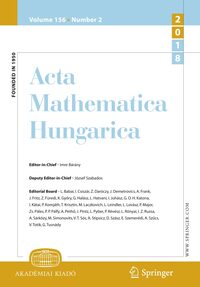 For subscription options, please visit the website of Springer Nature

Weighted estimates involving a function and its derivatives

Representations of inner products in the space of polynomials

Properties of the relative entropy of states of von Neumann algebras