Type 1 neurofibromatosis, also known as von Recklinghausen's disease, is one of the most common diseases with autosomal dominant inheritance. The gene of neurofibromatosis, an NF1 tumour suppressor gene, is located on Chromosome 17. Due to the loss of tumour suppressor function, mutation of the gene leads to the development of benign and malignant tumours. Gastrointestinal manifestations, most often gastrointestinal stromal tumour (GIST), are found in 25% of cases. The close association of the two diseases is well known in the literature, with more than 160 cases reported up to now. GIST develops in 7% of patients with neurofibromatosis, and the occurrence of NF1 among patients with GIST is 150 to 180 times more frequent than in the general population. GIST associated with neurofibromatosis is a separate entity, and unlike sporadic GIST it is usually multiple and it almost always develops in the small intestine. It manifests itself usually at a younger age, with a slight female dominance. Its histological characteristics include spindle cell type, the presence of skeinoid bodies, and frequent S100 positivity. Its low mitotic activity usually suggests a more favourable prognosis. C-KIT and PDGFRA mutations characteristic of sporadic GIST occur very rarely, in accordance with the hypothesis that the pathogenesis of neurofibromatosis-associated GIST is not c-KIT dependent. Presumably the pathomechanism of GIST associated with neurofibromatosis is different from that of the sporadic form, and the occurrence of GIST tumour is a part of the clinical spectrum of neurofibromatosis. In the few known cases mutations of c-KIT and PDGFRA probably develop at a late step of tumour genesis. Imatinib that has revolutionized GIST therapy is not efficient in this group of patients; however there are no sufficient data available yet. 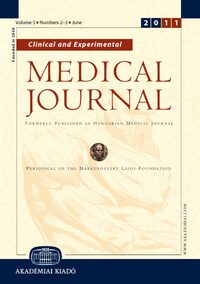