The reaction of different types of aromatic and aliphatic epoxides with sodium azide to give vicinal azido alcohols was studied in a microreactor with and without pillars in the channels. Dependent on the substrate, the regioselectivity of the ring opening is affected by the used solvent system, viz. acetonitrile–water (sometimes with 10% acetic acid to promote the reactivity of substrates) or t-butyl acetate–water containing Tween80 as a surfactant. For styrene oxide and α-methylstyrene oxide, the α/ß regioselectivity changes from 4 to 10 and 1.7 to 6.2, respectively, going from acetonitrile–water to Tween80-containing t-butyl acetate–water. The addition of a surfactant (Tween80) stabilizes the interface in the biphasic t-butyl acetate–water. Pillar-containing microreactors gave better conversions than microreactors without pillars and lab scale reactions, probably due to better mixing. 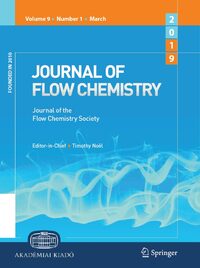