Reply to “Ayahuasca turned on my mind’s eye”: A case of acquired versus congenital aphantasia, as evidenced with DMT use?
Author: David Luke 1
View More View Less

In a recent article in this journal, Dos Santos et al. (2018) report a case of ayahuasca use by a man with aphantasia. This account is the first such report of the use of a psychedelic agent by someone with aphantasia. Surprisingly, the case, SE, reported an improvement in their visual imagery following one particular instance of ayahuasca use. In support of Dos Santos et al.’s (2018) favored psychological explanation for improvement and their suggestion that SE’s aphantasia was acquired rather than congenital, this letter reports on a case study of an individual with apparent congenital aphantasia who has experienced no visual imagery, despite reported having excessively smoked N,N-dimethyltryptamine. It is proposed that the theoretical distinction between acquired and congenital aphantasia be further explored with regard to the use of psychedelics. In addition, further research with psychedelics should include self-report measures that can index aphantasia, such as the Vividness of Visual Imagery Questionnaire, as well as behavioral tasks, such as those measuring binocular rivalry. 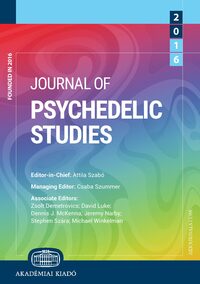 Psychedelic therapy as a complementary treatment approach for alcohol use disorders

An ontology of psychedelic entity experiences in evolutionary psychology and neurophenomenology

Getting high with the most high: Entheogens in the Old Testament

Treating drug dependence with the aid of ibogaine: A qualitative study

An ontology of psychedelic entity experiences in evolutionary psychology and neurophenomenology