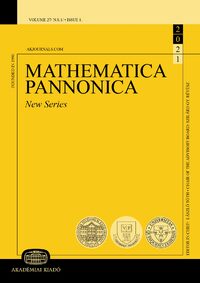 Mathematica Pannonica is a peer-reviewed mathematical journal devoted to the publication of high-quality research papers on pure and applied mathematics. The journal was started in 1990 and brings out two issues per annum.

The idea of launching a high level international mathematical journal in Austrian-Hungarian cooperation stems from late professors I. Gy. Maurer (1927-2012, Hungary) and H. Sachs (1942-2013, Austria). As a result of their initiative the first volume of Mathematica Pannonica was published in 1990. One year later, in 1991, professor G. Tironi (Italy) joined the "Founding Fathers" and the journal has became a truly "Pannon" scientific journal (comprising the historical regions of the ancient Pannonia Inferior and Pannonia Superior).

The aim of launching this journal was emphasized in the Editorial Preface of the first issue as reads:

“Our primary aim is to serve the mathematical community. At the same time it is not a secret that by organizing this journal we wish to contribute to the upgrading of the once flourishing network of cultural ties in the Central European Region.”

This specific aim has unquestionably been reflected in the composition of the Editorial Board of the journal in the past two decades.

The earlier volumes are available on the previous publisher’s website.