Rod-shaped nanocrystals are formed by self assembly of t -Bu-phenyl substituted tetra(carboxamido)perylenes (BPP) in different solvents. The structure and the dimensions of the nano-rods may be controlled by the choice of the hydrogen-bond accepting capacity of the solvent (DMSO, DMF, DMAc, HMPA), by the concentration and by the composition of solvent-mixture (by adding hydrogen-bond donating solvents), but is independent of the surface used for their deposition (mica, silicon, gold, glass). The different forms of aggregation were examined by AFM and SNOM and were correlated to UV-Vis absorption spectra of the aggregates in solution. The orientation of the transition dipole moment of the molecules in the nanocrystals has been determined by polarized fluorescence microscopy and, in combination with the crystal structure of the t -Bu substituted analogue of BPP, is used to develop a model for the internal molecular structure of the rod shaped aggregates. 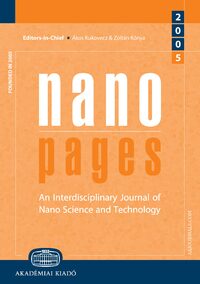 The Manufacturing of Titanium-Hydroxyapatite Nanocomposites for Bone Implant Applications

Synthesis, characterization and use of coiled carbon nanotubes