Currently, age-related macular degeneration is one of the most common eye diseases causing severe and permanent loss of vision. This disease is estimated to affect approximately 300–500 thousand Hungarians. While no treatment was available earlier, in the recent decade an antioxidant therapy became very popular using combinations of high dosage antioxidant vitamins C, E, beta carotene and zinc. Based on theoretical concepts and mostly in vitro experiences, this combination was thought to be effective through neutralizing reactive oxygen species. According to a large clinical trial (AREDS), it reduced progression of intermediate stage disease to advanced stage, but did not influence early stage disease. This original combination, due to potential severe side effects, is not on the market anymore. However, the efficacy of modified formulas has not yet been proven. Recently, a combination of omega 3 fatty acids, acetyl-L-carnitine and Coenzyme Q10 has been introduced for treating early stage age-related macular degeneration through improving mitochondrial lipid metabolism and ATP production in the retinal pigment epithelium, improving photoreceptor turnover and reducing generation of reactive oxygen species. According to a pilot study and a randomized, placebo controlled, double blind clinical trial, both central visual field and visual acuity slightly improved after 3–6 months of treatment and they remained unchanged by the end of the study. The difference was statistically significant as compared to the base line or to controls. These functional changes were accompanied with an improvement in fundus alterations: drusen covered area decreased significantly as compared to the base line or to control. Characteristically, all these changes were more marked in less affected eyes. A prospective case study on long-term treatment confirmed these observations, with an exception that after slight improvement, visual functions remained stable, while drusen regression continued for years. Sometimes significant regression of drusen was found even in intermediate and advanced cases. All these findings strongly suggested that the metabolic approach may be the first choice for treating age-related macular degeneration. Currently, this is the only combination of ingredients which corresponds to the recommended daily allowances and shows clinically proven efficacy. 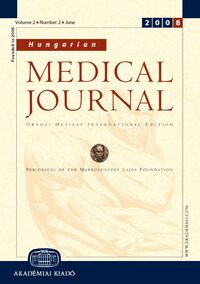 The Association between Body Mass Index and Diabetic Peripheral Neuropathy

Results of the ENDORSE Study in Hungary: Multinational, Cross-Sectional Study to Assess the Prevalence of Venous Thromboembolism Risk and Prophylaxis in Acute Hospital Care Setting

Genotypes of HCV in Bangladesh: Experience from a Tertiary Centre

Evaluation of Hepatoprotective Activity of Broccoli ‘Brassica oleracea’ in Rats