The relation between images of self and parents as defined in interpersonal theory and by the Structural Analysis of Social Behaviour (Benjamin), and internalising and externalising problems, as defined by the Youth Self-Report (Achenbach) was studied in a sample of 199 non-clinical adolescents (92 boys and 107 girls) aged between 13 and 17 years. Regression analyses showed that the pattern relating images of self and parents to mental health problems was different for boys and girls. Internalising problems for girls were best predicted from aspects of their self-image while for boys parental behaviour played a larger role. A pattern of self-blame and lower self-affirmation together with parental blame was important for girls’ externalising problems and a pattern of self-neglect and low self-autonomy and an uncertainty of parental love were important for boys externalising problems. Results emphasise that boys and girls have different kinds of vulnerabilities as risk factors for mental health problems. 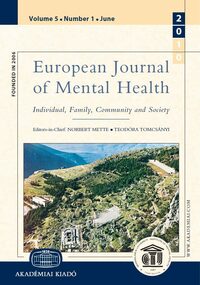 A Study of Factors Influencing Burnout in Teachers in Western Hungary

Charitable Activities of Historical Christian Churches in Hungary during Communism, and their Effects on Post-Communist Charitable Church Activities; Part 2