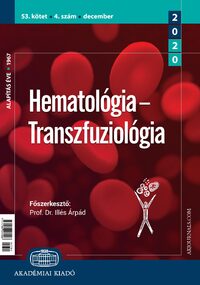 The pathophysiology, clinical signs and therapy of urate nephropathy

Practical considerations and questions in the treatment of chronic lymphocytic leukemia

One hundred and fifty autologous peripheral haemopoietic stem cell transplantations performed at the Department of Medicine, Debrecen University Medical Centre and lessons drawn from them

Introduction: Six years ago (in September 2003), the fifth Haemopoietic Stem Cell Transplantation Centre of Hungary began its activity. This centre registered as the No. 648 sub-centre of the European Blood and Marrow Transplantation Committee.

Objectives: To meet the demand for transplantation of haemopoietic stem cells in the North-Eastern regions of Hungary and to establish active connections with the domestic and international centres.

Methods: The interventions were performed in accordance with international criteria.

Results: Up to now 150 autologous stem cell transplantations were performed including 74 patients with multiple myeloma, 43 with non-Hodgkin lymphoma, one with chronic lymphoid leukaemia, 27 with Hodgkin's disease, four patients with autoimmune disease, and one with leiomyosarcoma. Survival rates were similar to Hungarian and international data. The centre has taken a role also in other activities using stem cell therapy at the University of Debrecen (dendritic cell-based vaccine program, stem cell therapy in myocardial infarction, peripheral arterial disease, and autoimmune diseases). This centre performed the most use of conditioning protocol Zevalin (ibritumomab tiuxetan), bischloroethylnitrosourea, etoposide, cytosine arabinoside, and melphalan (Z-BEAM) in patients with non-Hodgkin lymphoma in Hungary (ten patients were treated).