Anti-gypsyism in the Czech Republic: Czechs’ perception of Roma in cultural stereotypes

A Nineteenth-Century Mass Medium in the Formation of Cultural Stereotypes

Summary Visual images do have a constitutive role in the formation of culture and as a consequence in rendering cultural stereotypes. Since the communication by ways of pictures became prevalent and overwhelming with the easy distribution of pictures by “mechanical reproduction' (W. Benjamin), it is important to be aware of the nature of images and their relationship to verbal signs. I do share W. J. T. Mitchell's idea that “speech-acts are not medium specific', thus pictures just like words do possess semiotic power; that is they do take part in meaning-making (Bal), as well as in the production and the maintenance of culture, cultural identity and cultural memory. The importance of this recognition lies in the fact that Man is not only the producer, but also the product of culture; since this production is not exclusively linguistically based. Therefore, this paper aims at the examination of the relation of visual images and a text in the transmission of Hungarian stereotypes. I intend to carry out this in a medium that traditionally belongs to the category of “popular culture', yet its status was highly controversial in the time of its production in Hungary. This visual medium is that of the panorama, and the object of my query is Árpád Feszty's famous panorama, entitled “The arrival of the Magyars'. The painting carries its importance in many respects: it is not only an ideal and idealised “representation' of the settling of Hungarian tribes, but more importantly the veiled illustration of Mór Jókai's drama entitled Levente. My paper thus raises questions of the relation of the visual and verbal, of popular and high culture, and of the influence of national identity through verbal and visual imagery.

Experience through translation — the translated experience: The Turkish presence in Slovene literature and translation

The Slovene understanding of Turkish culture is essentially created through indirect, translated contact. It was first expressed through traditional Slovene folk songs and stories, depicting the Ottoman Empire either as a threat or as a land of sensuality and opulence. During the time of Yugoslavia, perceptions of “the Turks” were influenced by the translated works of Bosnian authors, promoted by official policies aimed at creating “brotherhood and unity” among the Yugoslav peoples. Finally, the post-socialist Slovene understanding of Turkish culture, despite a heightened interest, has again been indirect: formed through indirect translations of contemporary Turkish authors. The lack of literary translators and their deteriorating status in the Slovene translatorial field do not promise any significant change in the future.

Josip Kosor's dramatic work is well known to both Croatian and European readership and theatre public. First of all, common reader is well acquainted with the author's so called 'rural dramatic cycle' - especially his most 'specific' and the most appreciated modernistic play, Flame of Passion. This paper will try to interpret - using the critical concepts of literary anthropology, intercultural studies and theatre sociology - the so called 'Parisian phase' of his literary work, his intercultural dramas In Caf du Dme and Rotonda. After positioning his dramas in their cultural, historical and literary context, after analyzing their performative background, we will try to (1) discover the so called 'extraliterary alusiveness' that is present in Kosor's dramatic cycle, (2) read out some of the concepts of social, gender and, especially, ethnic stratification, as well as their function in producing cultural stereotypes about American and non-European, especially Far-Eastern world of the early twentieth century.

The Fortune of a Stereotype: The “Happy Good Savage” and the “Pitiful Westerner”

Summary The focus of this essay is on ethnic stereotypes that emerge in particular areas of group identities, as ideological products articulated through collective representation. The fervid exchange of stereotypes between Western and Eastern Europe has its sources in specific contexts: the two distinct “Europes', historically divided by unstable borders and the purportedly peripheral status and socio-economic belatedness of the latter. Due to the frequent journeys of the Occidentals to the European “Far East', Western stereotypes have been set swiftly by widely circulated texts. The cultural stereotypes I am pointing to - crafted in Romania, a liminal area of Eastern Europe - should mostly be identified as a response to these. The polar stereotypes of the “Happy Good Savage' and the “Pitiful Westerner' represented as such in an insightful series of literary texts, have an interesting prehistory dating back to mid-nineteen century, when Romanian intellectuals educated in Western Europe started building a modern national identity. In their birthplace, these polar stereotypes have constantly been evaluated on rhetorical, ontological and moral grounds. My analysis of both fictitious and non-fictitious texts (novels, travelogues, essays) clearly follows and underlines these levels of stereotyping.

Why we need binarism to go beyond it

In answer to the criticism of binary distinctions of the last decades, my theoretical argument in this paper is that on the cognitive level we are strongly in need of binarism. In my approach binarism is not identical with ontological dualism. It pertains to world orientation, because without the cognitive tools of differentiation life would be characterized by entropy. In order to define their place in the world individuals are in continuous search for identity and difference. A following step is to be vigilant from an ethical perspective not to grant a one-sided value to one of the binary concepts at the expense of the other. It is the concern of cultural stereotyping which has elicited the criticism of binary distinctions. However, ethical commitment cannot do without the tools of cognition. Coming to literature, I discuss the binary terms of (historical) fact and fiction. Analyzing Romain Gary’s La Danse de Gengis Cohn, a satirical Holocaust novel, I want to demonstrate that it is the tension between fact and fiction that allows for ambiguity and irony, intellectual strategies that go beyond binarism while accepting it as an indispensible cognitive tool.

Shanghai. Goodman, D. G.-Miyazawa, M. (1995): Jews in the Japanese Mind. The History and Uses of a Cultural Stereotype. New York, The Free Press 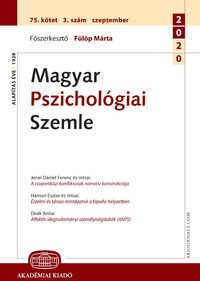 The psychology of relationship harmony in the East-Asian collectivistic societies

Cultural differences in motivation to learn