Energetics of some sulphur heterocycles

Journal of Thermal Analysis and Calorimetry

The present work is part of a broader research program on the energetics of formation of heterocycles, aiming the study of the enthalpic effects of the introduction of different substituents into heterocycles. In this work we present the results of the thermochemical research on sulphur heterocycles of the type substituted thiophenes with different kind of substituents, mainly alkyl, ester, acetyl, carboxamide, acetamide, carbonitrile and carboxaldehyde. The standard (p o=0.1 MPa) molar enthalpies of formation, in the condensed phase, at T=298.15 K, of a large number of substituted thiophenes, were derived from their standard massic energies of combustion, measured by rotating-bomb combustion calorimetry, while the standard molar enthalpies of vaporization or sublimation of those compounds were obtained either by high temperature Calvet Microcalorimetry, or by the temperature dependence of their vapour pressures determined by the Knudsen effusion technique. The standard molar enthalpies of formation, of the studied sulphur heterocycles in the gaseous phase, were then derived. The results are interpreted in terms of structural contributions to the energetics of the substituted thiophenes, the internal consistency of the results is discussed and, whenever appropriate and possible, empirical correlations are suggested for the estimation of standard molar enthalpies of formation, at T=298.15 K, of substituted thiophenes. A Table of enthalpic increments for different group substituents in positions 2 or 3 of the thiophene ring has been established. 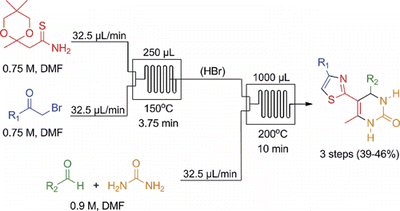 A novel method for C–H functionalization of heteroaromatic rings by using continuous-flow reactors is reported. Direct alkylation reactions were investigated under heterogeneous catalytic conditions using simple transition metal catalysts at elevated temperature and pressure. As a model reaction, the alkylation of indole was attempted using cheap Raney® Nickel catalyst. Alcohols served both as alkylating agent and as reaction media. The targeted 3-alkyl-indoles were obtained in moderate to good yield with reasonable selectivity. Transient protection on the N-atom increased the selectivity up to 80%. The scope and limitations were also investigated. In summary, direct alkylation with alcohols represents a rapid (residence time of <1 min) and traceless process with high atom economy (88–92%, in those cases where transient protection was not applied).

A series of substituted indole-2-carboxylic acid ethyl esters and aza-indole analogs have been prepared using continuous-flow hydrogenation. The identification of some key parameters using a design of experiments (DoE)-based approach allowed efficient optimization of each synthesis. The scale-up study for the multigram preparation of one model indole substrate showed the importance of working at steady state with the H-Cube pparatus. A new useful method for the easy preparation of substituted indoles in various quantities is presented.

A facile and benign route to N-heterocycles, including triazoles and triazolopyrimidines, has been developed. Using continuous-flow microreactor technology, organic azides are prepared in situ and reacted with cyanoacetamide in a [3+2] cycloaddition to produce a variety of substituted 1,2,3-triazoles, which can be elaborated into useful building blocks. A benzyl-substituted triazole was further functionalized to an analog of the core structure of the antiplatelet agent Brilinta®. The methodology lends itself well to flow chemistry, where reaction volumes are minimized, heating and mixing are consistent, and the need for intermediate azide isolation bypassed. The scope of the process is wide, and the efficiency is high, suggesting this as a practical, green route for the production of triazolo-based heterocycles.

The first continuous flow carbonylation reaction using aryl formates as CO precursor is reported. The reaction is practical, scalable and high yielding. The use of a flow protocol safely allows expanding the scope to activated chlorides, nitrogen heterocycles and to the selective introduction of an ester group in dihalo-derivatives. Further selective reduction of the ester formed to an aldehyde in flow is also described.

In medicinal chemistry, the development of synthetic procedures for the access of new heterocyclic systems as potential scaffolds is elementary. Herein, we report our results on the formation of small drug-like heterocycles, utilizing flow chemistry. This approach enables the extension of the reaction parameter window, including high-pressure/high-temperature or hazardous chemistry. In our work, various novel condensed tricyclic benzothiazoles fused with furo- and thieno-rings were synthesized applying a multistep continuous-flow protocol. The process includes two ring closure steps and a nitro group reduction step. Batch and telescoped continuous-flow syntheses were also designed and performed.

Despite extensive research into peptide synthesis, coupling of amino acids with weakly nucleophilic heterocyclic amines remains a challenge. The need for microwave technology to promote this coupling interferes with the scalability of the process. By applying the microwave-to-flow paradigm, a library of (α-aminoacyl)amino-substituted heterocycles was continuously produced at near quantitative conversions and the reaction was scaled up successfully. Various N-Cbz-protected amino acids were activated using BtH/SOCl2 under continuous-flow conditions with excellent yields. Their coupling with heterocyclic amines was accomplished in MeCN—NMP on a preparative scale. However, performing both steps in-line resulted in an inconvenient work-up. Therefore, a two-step approach was taken, isolating the intermediate Bt-activated amino acid via simple filtration. This allows for a solvent switch to DMSO for the coupling reaction which led to excellent conversions for a broad range of substrates.

Journal of Thermal Analysis and Calorimetry

Nitroimidazoles are heterocycle imidazoles with a nitrogen group incorporated in its structure. The objective of this study was to develop a model to characterize possible interactions between active substances and excipients using: Thermogravimetry, Differential Thermal Analysis, Differential Scanning Calorimetry, and DSC coupled to photovisual system. It was used three nitroimidazoles (metronidazole, secnidazole, and tinidazole) and two types of microcrystalline cellulose with different particle size (Microcel and Avicel). The binary mixtures were prepared in proportion (w/w) 1:1 (nitroimidazole:excipient). Thermogravimetric data demonstrated that the tinidazole was the nitroimidazole with better uniformity. The nitroimidazoles obeyed the zero order kinetic reaction, evidencing its vaporization processes. Differential thermal analysis data showed nitroimidazoles compatibility with the different microcrystalline celluloses studied, showing that microcrystalline celluloses stabilized the active substances. Calorimetric data of secnidazole showed two melting points, characteristic of the polymorphs presented in raw material. The vaporization constants values of nitroimidazoles studied were secnidazole > metronidazole > tinidazole and for the binary mixtures these values followed the order tinidazole > metronidazole ≥ secnidazole.