The goal of these studies is to draw attention to the application of the theory of scale-free networks in terminology. In the last few years there have been a lot of publications on the application of the scale-free network model (for a summary see Barabási 2002 and Csermely 2006). A brief summary of the basic information regarding networks will be provided and previous findings of linguistic research that were interpreted with the help of network models (terminology, quantitative linguistics, generative linguistics, psycholinguistics) will be surveyed.

Before networks were widely researched, there were a great number of linguistic findings on natural languages that now lend themselves to new interpretation through network theory. In the paper calculations on the numeric data obtained from previous publications on quantitative linguistic research will be demonstrated. Finally, I will elaborate on some aspects of the application of network theory in terminology, and introduce the model of terminological networks. 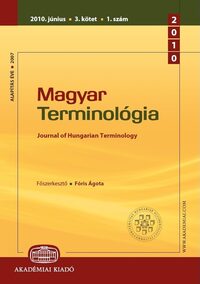 Initiating a terminology policy, the case of Turkey: TermTurk project